With that modern office outfit and those glasses, Schneizel really went from, “I’ll have her home by 8pm, sir” to “Your daughter calls me daddy too”…

This is a :schneizeleffort: edit of Funimation’s subtitles for the movie.

NO THANKS TO JAKA FOR FUCKING EVERYTHING UP. I think this could have been out like 1.5 days ago instead lmao.

For those who were lucky enough to not know, the movie is kicking off a 10 year plan for Code Geass. If you’re interested in chatting about Code Geass with other fans, drop by the Cs’ World Discord.

Back to FFXIV now bye.

Edit: Okay j/k there’s something else I need to say. We had originally intended to subtitle the picture dramas that came with the A-On store edition of the bluray (Re;f 103.00 and Re;f 1.05), but then Mr. Translator went on vacation around the BD release time. However, we bought and ripped the entire bluray. If no one else has made raws of them, we’ll get around to re-encoding them so they aren’t like 3gb each and release them later.

Re;surrection is being shown in American theaters in May.

No, we’re not subbing it.

Synopsis translated by Mononoke-no-Ko on Tumblr:

The world was united under the reformed United Federation of Nations, and enjoyed the peaceful days. However, that peace suddenly comes to an end. Suzaku who was accompanying Nunnally on her visit to a refugee camp as the masked man Zero, was defeated by a mysterious KMF, and the two were taken away. Following the secret order from Schneizel; Kallen, Lloyd and Sayoko who infiltrated the Land of Warriors, Zilkstan Kingdom, are attacked by a mysterious Geass user. In that place, there was C.C. who was called “Former Head (of Geass order)” by the attacker. Set in the invincible kingdom that once even defeated the army of Holy Britannian Empire, the wish that people draws, is it hope or despair? In the end, the expectation/intention of C.C. and the people of Zilkstan royal palace who know about Geass are….

Funimation will be releasing it in theaters stateside, so I don’t think we’ll be subbing it. If Heaven’s Feel is any indicator, then Funimation might have it in American theaters in March or April.

If you’re interested in chatting about Code Geass, check out the Cs’ World Discord.

Also if anyone plays FGO and has Waver with MLB HNS, pls 2 leave your friend code in the comments. I have Waver w/ MLB HNS too. uwu

Edit: Oops, there was a missing line before the opening. It’s: “If necessary, you’ll have to infiltrate the Settlement and rescue her.” I don’t remember how to use xdelta to make patches.

Code Geass is being recaped with 3 recap movies. All of the dialogue from the TV show was re-recorded with the original voice actors (sans Tamaki). Additionally, there are some new scenes to help bridge things together from their 9 episode copy/paste job. Oudou is the second of those movies and covers material from season 2 episode 17 to the end, episode 25.

We took the subtitles from Bandai’s official release of season 2 and copy/pasted them and adjusted them accordingly. Some scenes were the same except 1 line got removed, etc. For the new stuff, we just translated that. Any lines that seem radically different from Bandai’s release is because I had to watch this whole movie to check for Sindalf’s timing fuck ups and I just changed any line that pissed me off when I saw it. ¯\_(ツ)_/¯

First, the Black Knights’ betrayal was reframed to make it look like Schneizel forced them to betray Lelouch. I personally believe this is because Ohgi is Taniguchi’s self-insert character. Taniguchi has expressed disappointment before about fans not liking Ohgi and/or what he does in R2. The rest of the scenes for the betrayal, such as Asahina asking why they should trust Zero, are still in the movie, which makes them not including the betrayal weird.

Second, as I mentioned before, Shirley lives. I hard disagree with the English fans raging that Shirley living “changes the whole story”. If you’re going to bitch about something related to Shirley, then bitch about how Taniguchi said, “I didn’t kill her cause there was no time to do her arc” and then relegated her to being like a non-existant character. Anyway, since Shirley lives, there are some new scenes with her.

Lastly, the scene from the TV show where Suzaku and Schneizel bully/escalate/troll/goad/whatever each other into wanting to rebel against Charles was removed so they could reframe it to be 100% Suzaku acting his own.

As previously announced, there is a 4th movie in this project called Lelouch of the Resurrection. It comes out in February and is a sequel to Code Geass but takes place in the movie universe where they didn’t have time to kill Shirley. Presumably, the epilogue from this 3rd recap movie will lead into the events of this new sequel movie. We currently have no plans to sub it.

I’m a schneizel fangirl at heart and if there’s no schneizel in the new movie then I’m not gonna wanna do it. My effort level for this recap was at rock bottom cause the weren’t any new animated schneizel scenes. ?

Don’t listen to the idiots who haven’t even seen the movies yet say that the movies “changed a lot” or “made drastic changes” and then proceed to complain about the sequel movie taking place in the movie universe. It is very much still the same thing as the TV show, but Shirley is alive.

It’s been confirmed that Lelouch of the Resurrection is also a movie project that will be in theaters in Japan during February 2019. I think the Blu-ray will probably be out 5 months after the theater date? Anyway, we will sub the movie when it’s out on Blu-ray if there’s no English subs on the Blu-ray already, and there’s decent Schneizel screen time in the movie.

Code Geass is being recaped with 3 recap movies. All of the dialogue from the TV show was re-recorded with the original voice actors (sans Tamaki). Additionally, there are some new scenes to help bridge things together from their 24 episode copy/paste job. Handou is the second of those movies and covers material from season 1 episode 18 up to season 2 episode 16.

We took the subtitles from Bandai’s official release of season 1 and season 2 and copy/pasted them and adjusted them accordingly. Some scenes were the same except 1 line got removed, etc. For the new stuff, we just translated that. Any lines that seem radically different from Bandai’s release is because I had to watch this whole movie to check for KayDat’s timing fuck ups and I just changed any line that pissed me off when I saw it. ¯\_(ツ)_/¯

There are three super huge major changes for this movie.

First, the majority of the events in the movie have been reframed to be from Suzaku’s PoV, namely the first half of R2. They’ve removed Suzaku from Area 11 and the China arc and instead have a scene where Cecile summarizes the plot of those episodes to him.

Lastly, and most importantly, there’s a new scene with Schneizel pictured above. You see that table? I’m 99% sure he fucks Kannon on that table. As Nina proved to us in the TV show, tables are only good for stuff related to sex. 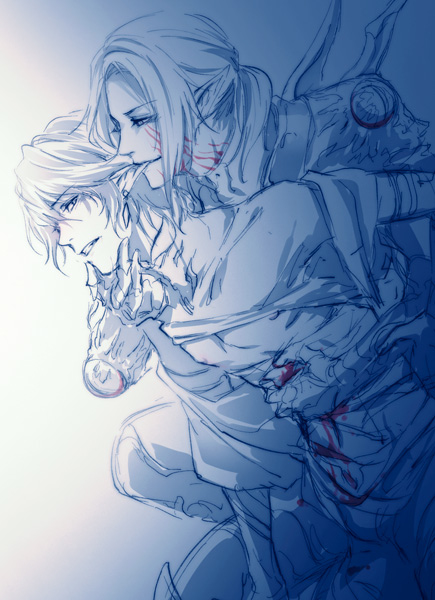 Waddap fam. Code Geass is being recaped with 3 recap movies. All of the dialogue from the TV show was re-recorded with the original voice actors (sans Tamaki). Additionally, there are some new scenes to help bridge things together from their 17 episode copy/paste job. Koudou is the first of those movies and covers material up to season 1 episode 17.

I believe this came out at the end of February but we didn’t decide to do it until last week when I saw a screenshot of one of the new scenes, which turned out to be Schneizel and Kannon hanging out in Schneizel’s fucking personal rose garden. You see that gazebo? They totally fuck in there.

Now, about the subs: We took the subtitles from Bandai’s official release of season 1 and copy/pasted them and adjusted them accordingly. Some scenes were the same except 1 line got removed, etc. For the new stuff, we just translated that. Any lines that seem radically different from Bandai’s release is because I had to watch this whole movie to check for Sindalf’s fuck ups and I just changed any line that pissed me off when I saw it. ¯\_(ツ)_/¯

For those of you who’ve seen the series, the biggest difference is the removal of Mao and everything related to his arc. There’s also no hotel scene. For those of you who’ve kept up with all of the side stories and spin-offs since R2 ended, there’s a new scene where Britannians see Lelouch and Nunnally off that is full of easter eggs. Even Clovis’s moe blob little sister from the old, old mobile phone game made the cut. Can you move to Leviathan?

The person who made the Jigglypuff, Pichu and Azurill Slides

PS: Rub a dub dub thanks for the grub Hey everyone good news I got a Faustlet crisis averted thanks for your continued support. Btw today is my birthday. I turned 18. I got a mimosa and now my face is red. Macross Delta is delayed because I told Kyhz to go get In N Out. Deal with it.

I’m looking for an FFXIV static with a8s on farm that will give me a fucking Faustlet. The static I’m in right now uses lootmaster and since I got the SMN book on our first clear and the caster coat on our second clear, I’m locked from getting a Faustlet until week 9 (week 9 cause our fucking pugged MCH got the Faustlet on our clear please fucking kill me).

Someone pls save me from having to play FFXIV for 4 more weeks.

My gatherers are weak as fuck pls hook me up with $$$gear$$$. I’m retroactively billing you for everything you’ve downloaded from us.

PS: Hi Jeffrey Lee. I’ve been in a Linkshell w/Shiro and Mydna for like 6mo now btw. And by “static”, I mean 7 lonely nerds to carry me through content.

Edit: Oh. I have a static now. My IGN is Aymeric’s Waifu though if you want to stalk(?) me.

The webpage is back now. Thanks if you gave me $$cash money$$ for a PS4. I’ll play Arkham Knight many times. Or something. We’ll go back to doing nothing now. Bye bye.